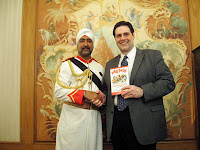 It is pretty common to have multiple wireless microphones going during the same public speaking engagement. The AV crew that sets everything up usually makes sure that they are all on different frequencies so that no cross over occurs. You should still double check it anyway. BUT WHAT ABOUT MICE?

When speaking in Thailand last week I ran into a situation that has never happened to me or the other seasoned presenter before. We each had a Logitech Trackman RF Mouse. RF stands for "Radio Frequency" which means that the wireless mouse doesn't have to be in line of sight with the receiver like an infra red mouse would. It also means that I couldn't keep my mouse from moving the cursor on his computer (the other guy was on right after me with no break).

We tried every trick we could think of with no luck. We finally decided to shut my whole system down quickly after I was finished and boot his up as fast as we could while he made some opening comments to the crowd.

With more and more wireless technology being used during presentations you must thoroughly check out all systems and consider presenters who are on both before and after you. This is yet another reason to be there early and find out what is going on during other programs. Had we not noticed this ahead of time he would have had a really shaky beginning to his program . .. if the program were switched . . . it could have been me!

Learn the techniques that will skyrocket your speaking career!
Posted by Tom Antion at 11:13 AM